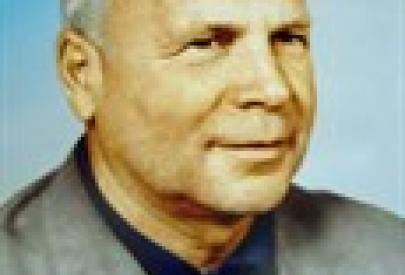 February 2012 saw the centenary of the birth of Arkady Aleksandrovich Sludsky, a famous zoologist and Fellow of the Academy of Sciences of Kazakhstan. He was the founder of research into vertebrates in Kazakhstan and founded the Laboratory of Mammals in the Institute of Zoology, which he headed from 1949 to 1977. His zoological interests were quite wide, but the saiga held a very prominent place in his research.

Yuri Grachev, a pre-eminent saiga biologist, has chosen A. A. Sludsky as a Saiga Hero

Before Sludsky's time, there were only brief, isolated accounts collected during expeditions, mostly about meetings with saigas in particular places and the saiga horn trade. In the 1940s and especially in the early 1950s, research was carried out more intensively. By that time, saiga numbers had recovered, following a reduction in the population to a critical level in the early 20th century and a prolonged depression, and the issue of saiga use could be raised.

Based on his studies, Arkady A. Sludsky prepared a report to the Council of Ministers of the Kazakh Soviet Socialist Republic. In 1954, saiga trade under licence was permitted in Kazakhstan. Over the subsequent 40 years, the saiga trade yielded a considerable profit to the state and in 1983, Sludsky was awarded the State Prize of the Kazakh SSR, along with a group of other biologists, for the development of biological principles for the sustainable use of saigas.

Sludsky's research up to the early 1950s was published in a substantial article called "The Saiga Antelope in Kazakhstan" (1955). This gave detailed coverage of past and contemporary saiga distributions, numbers and population density throughout Kazakhstan in different seasons. It also covered the biological principles of saiga resource management, saiga hunting business management, measures for protection and restoration of the species, and the needs for further scientific research.

In 1962, Sludsky published an article on predator-prey interactions, with a large part devoted to saiga-wolf interactions. It gives a detailed description of wolves' hunting habits and the victims' avoidance behaviour. For example, saigas form large calving aggregations to reduce predation mortality. Sludsky assessed the substantial mortality caused to saigas by wolves, but he concluded that it is not predators which cause their dramatic population fluctuations. Instead, by exterminating sick and weak animals, predators help to make prey populations healthier and serve as an indispensable factor in their continued existence.

The validity of these conclusions was convincingly confirmed in the 1970s when, over a decade, the growth and high numbers of the saiga population were concurrent with very high numbers of wolves.

In his other fundamental work, "Dzhuts in the Eurasian Steppes and Deserts" (1963), Sludsky discusses the influence of unfavorable weather conditions on domestic and wild animals, including the saiga. He notes that winter fodder shortage, exhaustion and mass mortality of ungulates occurs regularly throughout the steppes and temperate deserts of Eurasia. He discusses the conditions required for a dzhut (winter mass mortality due to a particular set of extreme weather conditions), and gives evidence for mortality rates up to tens or hundreds of thousands of animals. Sludsky describes the saiga's adaptations to winder conditions; changes in coat colour from brown to white, fat accumulation, the ability to dig for fodder under the snow, forming large herds, grazing with other ungulates, migrations, etc.

In 1965, a field programme for the saiga was set up on Arkady A. Sludsky's initiative; its tasks included conducting annual aerial censuses and ecological studies, including on feeding, reproduction, migration, disease and parasites. Recommendations on the rational use of saigas were submitted annually to government agencies and put into practice. This long research programme (from 1965 through to 1981) resulted in the collection of extensive materials on saiga ecology in Kazakhstan, which were summarized in the monograph "The Saiga in Kazakhstan" (Fadeyev & Sludsky, 1982). Sludsky personally participated in the research and is a co-author of the monograph, but unfortunately he was not able to complete it because of his premature death.

In subsequent decades, the research started by A.A. Sludsky has continued. This work is reflected in the 1998 book "Saiga: phylogeny, taxonomy, ecology, protection and use" (edited by Sokolov and Zhirnov), in the 1998 article "The Ecology and Management of Saiga in Kazakhstan" (by Bekenov et al.) and other works.

The vision of A.A. Sludsky is the reason why we now have such a strong basis of understanding of saiga ecology with exceptionally valuable long-term datasets, which are lacking for most other species.