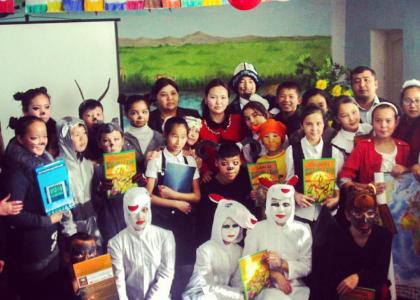 Before starting up their clubs, teachers attended a seminar on the principles of ecological education, helping to ensure consistency in planning and action between groups. Madina Abdikarimova, a teacher from school 37 in Nukus, Republic of Karakalpakstan, Uzbekistan, and one of the first supporters of Steppe Wildlife Clubs, says “It is surprising, but our children know so little about saigas! How can they learn about them, when it is easier to find out about Antarctic penguins and African lions from the TV and textbooks than it is to learn about a unique antelope that was found close to their villages and towns until quite recently?”

For generations, Steppe communities had been accustomed to herds of saigas grazing alongside them. Today if you ask a schoolchild living in a steppe village whether they have seen a saiga, likely the answer will be no. At best, children know saigas from pictures in books or from stories related by elders. Today the saiga is in dire straits, and teachers provide a critical role in educating youth about the role of saiga as a vital part of the arid steppe ecosystem. The Steppe Wildlife Clubs are a key tool in that educational process.

The clubs take part in a range of activities including: