The "Saigachy" reserve in Uzbekistan has been reorganized

The Saigachy reserve is based on the existing Saigachiy sanctuary, which was a classic example of a "paper park". The reserve never had its own land or staff, its designation was extended several times, but proved ineffective in fulfilling its primary objective - the protection of saiga calving grounds. Our colleagues in Uzbekistan have been working with the government to define boundaries and redesignate the park.

On July 22, 2016, the Cabinet of Ministers of Uzbekistan adopted a proposal from the State Committee for Nature Protection of Uzbekistan (Goskompriroda) to institute the Saigachiy landscape reserve. This decision is the culmination of the work of many individual experts, organizations and agencies to improve the area and status of the reserve, including Goskompriroda, the Academy of Sciences of Uzbekistan, the GEF/UNDP project "Mainstreaming Biodiversity in the oil and gas sector of Uzbekistan", the Saiga Conservation Alliance, Fauna and Flora International and the Whitley Fund for Nature. It opens a new stage in the development of this protected area, designed to preserve the unique landscape and biodiversity of the northern part of the Karakalpak Ustyurt and, above all, to restore the saiga population. Creating a landscape reserve also opens up new possibilities for the integration of local people and land users into nature conservation and sustainable use of natural resources. 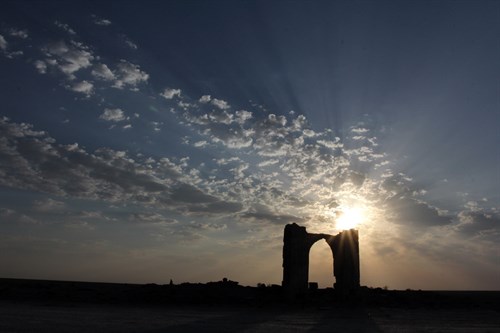 The Saigachy reserve is based on the existing Saigachiy sanctuary, which was a classic example of a "paper park". The reserve never had its own land or staff, its designation was extended several times, but proved ineffective in fulfilling its primary objective - the protection of saiga calving grounds. The reorganisation allows for staffing of the reserve, mainly with state inspectors for nature protection, but public inspectors can also be employed.

The area has changed shape and moved to the north-west, approaching close to the state border with Kazakhstan and the eastern escarpment of the Ustyurt plateau (fig 1). These are the best saiga habitats in the Karakalpak Ustyurt. The reserve will have 5 sites with strict protection (core zone) and an adjacent buffer zone, with the area totalling 628,300 hectares, of which 219,800 hectares is buffer zone. It is the largest protected area in Uzbekistan, large enough for Brunei or two Luxembourgs to fit inside. Most of the landscape reserve (about 95%) is in Kungrad district. The remainder is in Muinak district in the immediate vicinity of the Aral Sea.

Saigachy reserve is managed by Goskompriroda, with an office in the village of Karakalpakstan. Thanks to the GEF/UNDP project, ranger field bases have already been constructed at key points, and the reserve has off-road vehicles, field gear and equipment and information signs.

According to the legislation, the land, flora and fauna, and other natural elements of the core zone of the reserve will be withdrawn from economic use and become areas for environmental protection. The reserve's objectives are: conservation of nature; promotion of research and monitoring; training of scientific personnel and nature conservation specialists; and ecological education. Research activities will be based on the long-term surveys carried out by Academy of Sciences of Uzbekistan as well as scientific institutions and universities, local and international scientists.

The boundaries of the Saigachy reserve and its buffer zone, as well as other objects, will be marked on the ground by notices, posts and other signs. In the buffer zone, the following infrastructure will be put in place, in coordination with the reserve's administration: toll roads; repairs of communications equipment; construction of buildings and facilities for tourists; geological exploration; grazing. The following activities are limited in the buffer zone: mining; construction of gas pipelines and other industrial infrastructure; construction of new roads. The following activities are prohibited: hunting and trapping; the use of pesticides.

Thus, Uzbekistan has successfully completed the transformation of the "Saigachiy" reserve into a landscape reserve, designed to be an active mechanism for the protection of the Ustyurt plateau's unique natural ecosystems and its key species - the saiga antelope. It is difficult to overestimate the importance of this event, which is critical for survival of saigas which are currently close to extinction in Uzbekistan.