Inn Spring 2015 Rory McCann visited Kazakhstan to pain his third mural for us. His educational visits full of discussions, presentations, painting and fun always inspire the children and villagers, who come out to help and see what he is up to!

On the eve of the May holidays a mural of steppe wildlife was opened ceremonially at Yashkul School, 90 km from Elista, the capital of the Republic of Kalmykia. This new approach was first used in Uzbekistan and Kazakhstan in 2014-15. This year, Professor Yu. N. Arylov and the Saiga Conservation Alliance helped implement the idea in Kalmykia. The school hosts the successful Zhivoye Naslediye (Living Heritage) steppe wildlife club, headed by Ye. A. Samtanova, an Honoured Teacher of the Russian Federation. The mural artist wasRory McCann, whose murals can be found in the UK, Seychelles, Australia, Oman and Japan. The idea of the project was to change people's attitude towards the saiga by creating a mural with the involvement of teachers, children and their parents. The project was supported by the Saiga Conservation Alliance, Wildlife Conservation Network (WCN) and WWF-Russia.

Since the morning of 18th April 2016, the people of Yashkul' had been waiting impatiently for the arrival of British wildlife artist Rory McCann in Kalmykia. Mr Khaglyshev, the governor of Yashkul' District, was among those who waited. Greeting Rory, he emphasised the significance of the project and noted that it would help improve people's attitude to wildlife.

At the ceremonial reception Rory was greeted by all the schoolchildren and their teachers and, in accordance with Kalmyk tradition, was presented with a whitekhadak(silk scarf). The reception grew into a friendly conversation, at which Rory told us about himself, his family and the numerous projects he had been lucky to perform in different countries around the world. The pupils told Rory about their achievements in ecological education. The mural painting project lasted for 12 days with the active participation of pupils of different ages - primarily those who had won a Steppe Antelope drawing contest the month before the artist's arrival. At each break Rory was surrounded by crowds of children, who watched attentively how carefully and beautifully he drew the images of steppe animals and plants. Despite some language difficulties between them, the children asked Rory many questions, trying to learn as much as possible about the flora and fauna of the countries he had visited. Other people living in Yashkul' also came to see the mural and gave Rory various presents. The Garyayev family presented Rory with a picture by Pavayev, a well-known Kalmyk painter, and the Nokhayev and Nasakayev families gave the artist a traditional Kalmyk game a 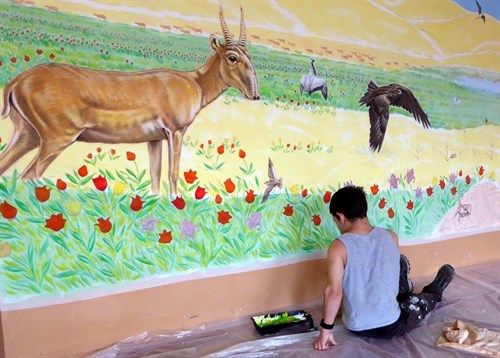 Rory gave lessons in painting to the 60 children that had participated in the drawing competition. They learnt to draw animals and make postcards using a stencil. In a master class for the youngest students the children listened to Rory's instructions with great interest and repeated his every movement. As a result, a herd of drawings of saiga babies appeared in the classroom. Rory also attended English lessons, where he spoke to the children. Steppe Wildlife Club members invited the painter to one of their meetings, where Rory learnt about the club's activities, played the guitar and sang wonderful songs. Club members also performed a song in English. At the end of the meeting the pupils made Rory a member of their club and presented him with a badge with the club's symbol and a traditional Kalmyk chess set.

A ceremony dedicated to the completion of the mural, named The Living Heritage of the Steppe, took place on 29th April, featuring the teachers, pupils, their parents and other guests. In their speech the teachers and students emphasised that the mural symbolised the unification of people from different countries for saiga conservation, and that it would not only make people happy with its beauty and originality, but also remind them of the necessity to protect wildlife.

Two weeks flew by like one day, and no one wanted 'our' Rory, who had in this time become a close friend of the villagers, to leave. Doubtless, Rory gave a wonderful present to all the people of our republic, which will serve for many years ahead to help the younger generation foster a positive attitude to wildlife.

In conclusion, we would like to express our enormous gratitude to Rory and all those who organised the visit of this wonderful painter to Kalmykia, as well as to the teachers and students of the school for organising and participating in in this important project.

A film about the mural can be found here

For the past 4 years, I have worked as a mural artist, with a focus on using my art to inspire people to have a greater interest in wildlife. Without a doubt, the most exciting and rewarding work I have done to date has been with the Saiga Conservation Alliance (SCA) in Uzbekistan, Kazakhstan and most recently, Russia. In each of these cases, I have travelled to a part of the country where saigas are under threat. My mission as an artist has then been to paint a huge mural, involving the community in the process, with the aim of engaging everyone in the work that SCA does and the importance of preserving the local fauna and flora.

In April of this year, I boarded a plane for Astrakhan, in South-West Russia. I was met at 4am (local time) by Yuri Arylov (a university professor and associate of SCA) and his son-in-law, who drove me through the night to the village of Yashkul', which was to be my home for the next 2 weeks. Before any painting could begin, I met with various people, including my translator (Anatoly), the principal of the local school where I'd be working, and the head of the village, who was a large, cuddly man!

Later that day, I was welcomed into the local school with a mesmerising performance by the older pupils, which represented the springtime flowering of the tulip. This also gave me an opportunity to explain a bit about why I was there and about the important work of SCA. I was now ready to start painting, and it didn't take long for the children to show their curiosity and fascination. Even just priming the wall with white paint elicited lots of "oohs" and "aahs"! As each day went by, more and more pupils would come during their breaks and after school to watch and ask questions. Once I had painted several saigas onto the mural it provided a great focal point for discussions about the saiga's plight and the need for it to be conserved. When I was low on energy one of the teachers would bring me juice and chocolate saying "it is the Buddhist way". It made me think that perhaps I should look into Buddhism - the religion of chocolate!

Towards the end of my visit I was taken to a nearby nature reserve and had the wonderful pleasure of seeing saigas in the wild. We also saw Demoiselle crane, little bustard, European souslik (tiny ground squirrels), and a pair of very friendly camels, one of whom made multiple eager advances on us! I came back to the mural with renewed inspiration to represent the full beauty of the steppe habitat and wildlife. During my last few days we did a lot more outreach including fun art workshops for the younger students and master class lessons for the older students, who were given the chance to paint onto the mural itself. My hope is that this engagement will inspire these pupils to appreciate the environment all the more and perhaps influence what they do in their career and lifestyle later in life.

So, after 2 weeks of painting, chatting, laughing, chocolate, camel encounters, saiga sightings and so much more, the mural project was complete. The school held a grand opening ceremony with pupils, staff and members of the community in attendance. Lots of gifts were exchanged and lots of fond farewells were made. I had an especially emotional farewell from the cleaning staff who gently stroked my arms and head while softly speaking kind words. I couldn't understand a word, of course, but the sentiments were clear!

My thanks also all donor organisations and to E.J Milner-Gulland and Carlyn Samuel in person for their belief in my work, and to Yashkul School', Anatoly, and everyone in Yashkul' who made me feel so welcome.