Educational camps for children are a growing movement for engaging children in conservation in Kazakhstan. Here we report how the first educational camp for Saiga Friends clubs in the country went

Steppe ecology clubs have been springing up actively within schools in different regions of Kazakhstan over the last few years, with the goal of providing ecological education to local children, with a focus on saiga conservation. The Ustyurt saiga population is currently the smallest and most threatened, which is why it is important to make local people aware of the problem of poaching and to show them the necessity of protecting saiga. Therefore, we decided to organise a field summer camp for children living in villages on the Ustyurt Plateau. 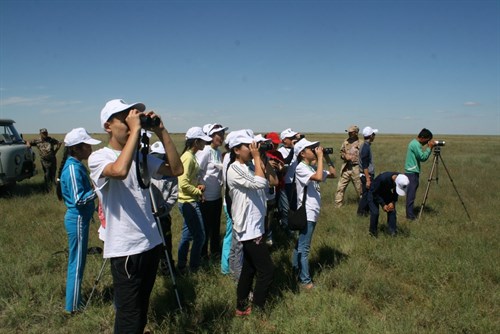 Fifteen children aged between 11 and 14 from the Saiga Friends steppe clubs in the town of Shalkar and the villages of Akkaytym, Baykadam and Bozoy, Shalkar District, were invited to the field camp, organised by ACBK with the support of Fauna & Flora International (FFI). Between 27 June and 1 July the students stayed in an area near Lake Malaydar within the Irgiz Turgay State Nature Reserve. The children learnt about the plants and animals of the region. The camp organisers also worked to develop an ecological culture in children and unite members of the Saiga Friends clubs to carry out further joint activity. The camp enabled the leaders of ecological clubs on the Ustyurt Plateau to gather, discuss future directions and develop a work programme, as well as sharing their experiences and celebrating their achievements. The children were very quick to get to know each other, exchange opinions and make friends.

The camp programme included games, training courses and discussions, films and practicals. On the first day the children learnt about the Irgyz Turgai reserve, its wildlife and historical and cultural events in the region. On another day they learnt about how to make a herbarium and about the reserve's insects. They dedicated a full day to bird watching. The lakes close to the camp were a perfect place for this. The children observed how different bird species behaved in the wild, and filled in forms to record the species they saw. By the end of the day they had recorded 232 individuals of 16 bird species, 2 of which (imperial eagle and Dalmatian pelican) were in the Red Book. However, the most exciting encounter was as the children were travelling back to the camp. Three saiga females with two youngsters crossed the road right in front of their car! The students, who had never seen saigas before, were astonished and delighted; they had seen the steppe antelopes about which they had heard so much, and the conservation of which they had discussed! Also, during one excursion the children visited the Jamanshyn meteorite crater. A popular hypothesis is that the crater was formed through a meteorite (or, perhaps an asteroid or comet) falling, which was 200-400 m in diameter and which evaporated at the moment of the explosion. Right after the collision the crater was 500 m deep.

All the field camp participants were presented with T-shirts, caps, educational materials and other commemorative gifts. However, the most important thing was that the camp's atmosphere, communication, practical lessons and wildlife watching left an indelible impression upon them. We believe that this wildlife experience will help the children feel responsible for conserving the nature of their native land in future.