The Mongolian saiga (Saiga tatarica mongolica) occurs in four subpopulations in western Mongolia. The subspecies is categorized as endangered by IUCN and the main threats are overharvesting, competition with livestock for resources, and harsh winters preceded by summer droughts. However, the Mongolian saiga population has been increasing over the last few years, owing to enhanced protection and favorable climate. The most recent estimate in 2014 suggests a population of ~15,000 individuals across its entire range. 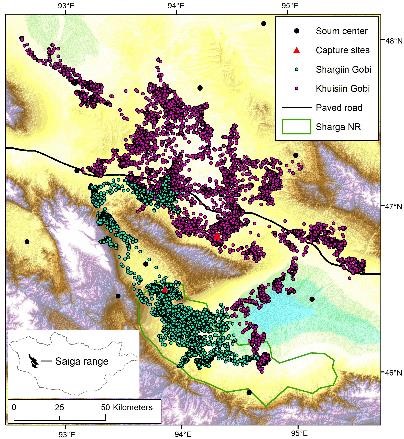 Currently a 263 km-long road from Gobi-Altay to Khovd province is in the process of being upgraded to asphalt with the aim of improving the living standards of rural communities by facilitating access to markets, education, and health care. Part of the road traverses Khusiin Gobi, which is prime saiga habitat. The road is predicted to result in substantial impacts on saiga by impeding movement, direct and indirect habitat loss, and increasing poaching due to better access to their range. In the absence of proper monitoring, mitigation measures aiming to reduce the impacts of the paved road cannot be planned effectively. Our overarching goal was therefore to implement field surveys to monitor the effects of paved roads on the distribution and movements of Mongolia saigas using satellite telemetry.

We captured and collared 8 saigas in Shargiin and Khuisiin Gobi between 30 September and 02 October, 2015 (Figure 1). Individual saigas were tracked using GPS collars (Sirtrack - Pinnacle Iridium Lite G5C 275F) which send a location every 2 hours. A total of 22,732 GPS location fixes were collected for a 10-month period from capture until July 2016, averaging 3,221 locations per animal (range = 2,875 - 3,358), excluding GPS locations collected for the one animal that was tracked for only 15 days. Approximately 7,006 locations (~ 69% of the total) from the four animals captured in Shargiin Gobi were within the Sharga Nature Reserve over the entire tracking period (Figure 1). We documented a new migration route that connects saiga subpopulations in Shargiin and Khuisiin Gobi, which is an alternative to the migration corridors previously defined using GPS radio-collars by Berger et al. (2008).

* An individual tracked for only 15 days

Range sizes varied more than 7-fold between individuals (range = 1,115 - 7,810 km2; mean = 4,013 km2; Table 1). The average range size for animals captured in the Khuisiin Gobi (5,436 km2) was substantially larger than those captured in the Shargiin Gobi (2,117 km2), where there is less human disturbance (Kruskall-Wallis test: H = 9.34, p < 0.05). The distance between individual saigas and the road varied monthly (One-way ANOVA: F = 25.37, p < 0.001) being the closest in February and furthest in July 2016 (Figure 2). Our results suggest that human disturbance primarily associated with road construction work in Khuisiin Gobi during May-October negatively influenced saiga distributions by causing them to use areas farther from the road.

Our planned analyses will relate the movement data to biological season, environmental and human associated variables, to determine other key factors influencing saiga movements, range size, and habitat use. Future monitoring efforts should consider capturing and collaring more animals and monitoring their movements for at least two consecutive years to better understand inter-annual variation in movement and habitat use in light of human disturbances, particularly paved roads.