Despite all the economic and political challenges that were taking place 100 years ago, the Russian Government decided to establish the first nature reserve in the Russian Empire; Barguzinsky Reserve on the shores of Lake Baikal. This reserve aimed to restore a stable population.

This event launched a series of actions aimed at creating a uniform, scientifically grounded, system of specially protected areas in Russia. Between 1922, when the Union of Soviet Socialist Republics (USSR) was formed, and 1991 when the country disintegrated, the same system pertained in all the Soviet republics. 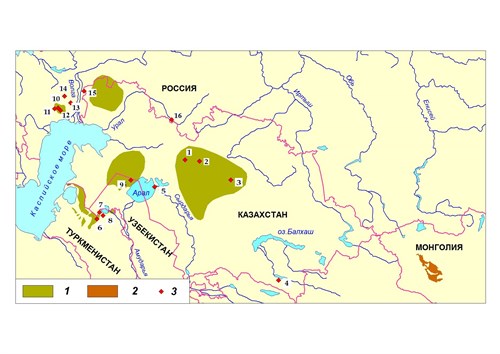 Nowadays, each of the former Soviet republics has its own laws and Protected Area system. However, the foundations of these systems were laid in the late 19th-early 20th century based on work by outstanding Russian and Soviet scientists and naturalists, including I. P. Borodin, G. F. Morozov, G. A. Kozhevnikov, V. P. Semenov-Tyan-Shansky and A. N. Formozov. According to the Convention on Biological Diversity, Protected Areas form the cornerstone of in situ nature conservation, enabling ecosystems to be conserved and viable populations of species to be maintained and restored in their natural environment. By the early 1990s the USSR's network of specially protected areas comprised around 200 strict reserves (zapovedniks), 23 national parks (natsionalny park) and over 3,000 wildlife preserves (zakazniks). This system was rather different to that adopted in other countries, with Zapovedniks being closed to most uses with the aim of maintaining as pristine an environment as possible, with scientific research as a key aim. Zakazniks tended to allow some human uses, but were flexible designations that could even move seasonally to protect migratory species (including saigas). Although the independent countries of the former USSR have altered and extended their Protected Area legislation, the core philosophy still owes much to the vision of the system's founders.

The Republic of Kazakhstan has 113 protected areas, but saigas are found in just five of them):

The Irgiz-Turgay State Nature Reserve, with an area of 764,000 ha, was established in Irgiz District in 2007 in order to conserve and restore a range of ecological communities, protect the seasonal habitats and migration routes of saigas from the Betpakdala population, and conserve the unique marshes and lakes of the Irgiz-Turgay wetland system.

The Altyn-Dala State Nature Reserve was established in 2012 on an area of 490,000 ha in order to conserve the unique steppe ecosystems of Central Kazakhstan. The reserve is located in the closed basin of the Turgay and Uly-Jalanshik Rivers and covers the key calving, wintering, migration and concentration areas of the Betpakdala saiga population. Sarykopa, the region's largest system of freshwater lakes, which is regarded as an Important Bird Area, also lies within the reserve.

The Korgaljyn State Nature Reserve, with an area of 543,000 ha, was established in 1968 in the central part of Kazakhstan's steppe zone. Most of its territory is occupied by the marshes and water bodies of Lakes Korgaljyn and Tengiz. 260,000 ha of pristine steppe west of Lake Tengiz were added to the territory in 2008, to protect saigas, particularly in the traditional calving areas of part of the Betpakdala population.

The Naurzum State Nature Reserve,with an area of 191,000 ha, was established in 1966. It is in the centre of the belt of Eurasian steppes on the Turgay Plateau, Northern Kazakhstan. Its aim was to monitor typical, rare and unique natural steppe communities and conserve them in their natural state. Saigas are found in the Reserve between May and September.

The Barsakelmes State Reserve was established in an area of around 17,000 ha in 1939. In 2016 it was renamed Barsakelmes State Biosphere Reserve and extended to 407,132 ha through the addition of the Kaskakulan section, a previously submerged area, and the creation of buffer and transition zones. This is the only reserve in the former Soviet Union that features extreme ecological conditions and lies within the zone of a global ecological catastrophe - the shrinkage of the Aral Sea. The most valuable animals within the reserves are ungulates, and particularly an isolated group of saigas. As the Aral Sea shrank, Barsakelmes Island became a peninsula, and its saigas were able to migrate to the eastern shore of the lake to access sources of fresh water.

Currently, there are 9 State Nature Reserves and 16 wildlife preserves in Turkmenistan. TheKaplankyr State Nature Reserve(fig. 1-6) was established in 1979, and its current area comprises around 282,000 ha, a plateau-like clay-rich elevated region in Southern Ustyurt, at the junction of northern and southern deserts, not far from the border with Uzbekistan and Kazakhstan. It contains the Sarykamysh (fig. 1-7) and Shasenem (fig. 1-8) State Wildlife Preserves (zakazniks). Formerly saigas from the Ustyurt population, which came from Uzbekistan in particularly cold winters, used to be recorded in the reserve. A report submitted by Turkmenistan to the CMS Secretariat in 2015 says that individual saigas still visit the area between December and March.

The system of protected areas in Uzbekistan comprised 9 state nature reserves, 2 national parks and 9 wildlife preserves. A new reserve type, theSaigachy Landscape Reserve(fig. 1-9),was established in Karakalpakstan on an area of 848,000 ha in 2016. The location was selected based on local natural conditions, which are best habitats in the area for saigas and some other rare animal and plant species of the Ustyurt Plateau. The reserve includes both the traditional migration routes of the Ustyurt saiga population and some of their breeding areas.

Currently, there are over 12,000 protected areas in Russia, of various kinds, from federal to provincial. Of the federal protected areas there are 103 state nature reserves, 47 national parks and 67 wildlife preserves. Some of the protected areas are primarily aimed at saiga conservation.

The Cherniye Zemli State Nature Biosphere Reserve(fig. 1-10) was established in 1990. Its main sector, Stepnoy, with an area of almost 100,000 ha, is situated in the Caspian Depression, between the Kuma and Volga Rivers. In 2009 the reserve took on the management of three federal wildlife preserves, Makletinsky (fig. 1-11), Sarpinsky (fig. 1-12) and Kharbinsky (fig. 1-13), of which Makletinsky is in the current range of the pre-Caspian saiga population. However, the other two, Sarpinsky and Kharbinsky, are further north, in an area which saigas no longer visit.

The Stepnoy State Wildlife Preserve (zakaznik)(fig. 1-14), currently about 109,000 ha, was founded in 2000 in order to conserve the natural feather-grass steppe ecosystem and a number of rare species of plants and animals (particularly saigas). It is located in Limansky District, Astrakhan province, close enough to the Cherniye Zemli Reserve, that it provides a buffer against potential trespassers at the eastern border of Cherniye Zemli. This means that the two reserves together provide an integrated saiga conservation area.

The Bogdinsko-Baskunchaksky State Nature Reserve(fig. 1-15), of approximately 19,000ha, was founded in 1997 in order to conserve the little-disturbed semi-desert communities around Lake Baskunchak, one of Russia's largest closed saltwater bodies. It also encompasses Mount Big Bogdo (149.6 m above sea level), the highest point of the Caspian Depression. The saigas of the Volga-Ural population occasionally visit this reserve from Kazakhstan. Previously, the area around Lake Baskunchak was within saiga range and on a migration route.

The Orenburg State Nature Reserve(fig. 1-16), 40,000 ha in size, was established in 1989 in order to conserve and restore unique steppe landscapes. Only one of its five sections, Aschisay Steppe, 7,200 ha in size, is currently reported to receive occasional visits from saigas from the Betpakdala population.

Saigas from Kazakhstan's Volga-Ural population sometimes visit areas of Astrakhan, Volgograd and Saratov provinces on the left bank of the Volga River, but unfortunately there is no protected area in this region. 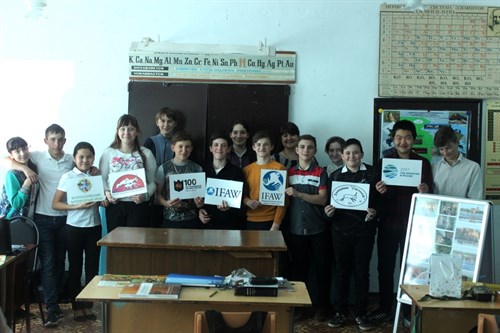 Vladimir Putin, President of the Russian Federation, decreed 2017 to be the Year of Protected Areas. Amongst other things, this resulted in the "Zapovedniki" Centre for Ecology and Education initiating the All-Russia Lesson on protected areas, with the support of a number of other organisations. The Lesson lasts for 45 minutes and is targeted at children of various ages. It teaches them about their country's wildlife and the system of protected areas that is meant to conserve its diversity.

Protected areas which contain saigas also took part in this activity. Teachers and researchers from the Bogdinsko-Beskuchansky Reserve held an extracurricular event called 'The Bogdinsko-Beskuchansky Reserve, a Gem of Astrakhan', which consisted of a colourful presentation, poems, songs and a competition. The children learnt that the Bogdinsko-Beskuchansky Reserve is a unique place visited occasionally by guests from Kazakhstan - saigas - and that it is vital to conserve those areas for future generations. Staff from Cherniye Zemli Reserve also gave a series of lessons in schools near their reserve, including competitions, films and souvenirs. Stepnoi reserve similarly gave a presentation to their local schoolchildren about the diversity of fauna and flora in their reserve and the hard work that rangers do to protect that fragile and vulnerable corner of Astrakhan province. Saigas were the main subject of the lecture, which emphasised how the younger generation - the schoolchildren themselves - would have to take up the cause of conservation in their native land. The children also learnt about the Saiga Conservation Alliance and its activities in Russia and elsewhere. The lesson culminated in a short quiz, with prizes donated by the International Fund for Animal Welfare. 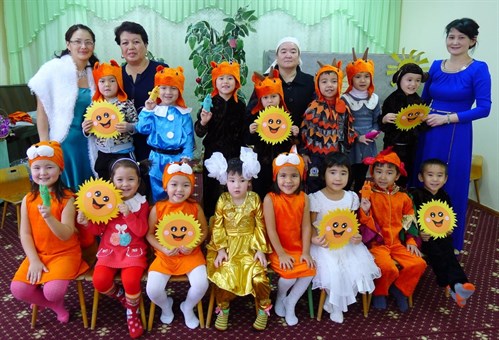 The initiative of Russian scientists encouraged their colleagues in Uzbekistan. Over 2,000 people, young and old, from the city of Nukus and the villages of Jaslyk, Karakalpak and Kirkkiz, took part in events celebrating protected areas in Uzbekistan and around the world. It was a real challenge for teachers, as they not only had to master new material, but also to think about how they should integrate protected areas into each of their subjects in the most interesting and accessible way.

The Day of Protected Areas began in Nukus. Some of the children visited the Lower Amudarya Biosphere Reserve to explore its riparian forest (tugai) ecosystem and its main inhabitant, the Bukhara red deer, and learn about the work of rangers and researchers. Those who had been lucky enough to participate in the expedition then shared their impressions with their classmates. The event climaxed with a grand show, followed by a screening of the filmThe Saigas of the Usryurt Plateau: The Right to Live.

Schools in the villages of Jaslyk, Karakalpakstan and Kirkkiz then picked up the baton. During Physical Education lessons, children chose the role of some rare animal, which then had to get to its reserve through a series of obstacles. In music lessons the children became one of the characters in a puppet show, defeating poachers and saving a saiga baby, then taking it to a reserve, its new safe and cosy home. In school No. 56 in Karakalpakstan, an ecotheatre and flash mob by members of the My i Mir (We and the World) steppe club added to the festival. In Kirkkiz the steppe clubs also focussed on saigas for their performance and competitions. The children saw a film about Chatkal Reserve in the mountains above Tashkent, and asked questions of researchers and reserve staff.

A team of ecologists' visit to a kindergarten was a highlight. This is where a new initiative called Ana Saygak (Mother Saiga) is being developed. This time they presented a happy fairytale, in which little saigas made friends with good children and together defeated poachers, saved the saigas' mother and arrived in Saigachy Reserve to enjoy a new life.

So, the Day of Protected Areas events and lessons are over in Russia and Uzbekistan. All the schools have returned to their routines. However, a caring attitude towards wildlife, and a feeling of involvement in the common cause of conservation of vulnerable and unique ecosystems, have been planted in the soul of each participant. We hope educational events such as these will become an ongoing tradition.