Saiga Day has really picked up momentum since we launched it in Uzbekistan several years ago, today it takes place right across the saiga's range, read on to find out how it was celebrated this year.

This year the celebration of Saiga Day in Kalmykia was divided into two stages; the first part was held in Yashkul' District on 10th April and the second part in Chernozemelsky District on 26th April. Both districts are core saiga habitat, where females aggregate year after year for calving. This is the period when our beautiful steppe awakens and tulips, irises and other plants begin blossoming, while wild animals and birds rear babies and hatch eggs. Baby saigas inform the world of their arrival by making gentle sounds that spread across the steppe. Life is restarting!!! 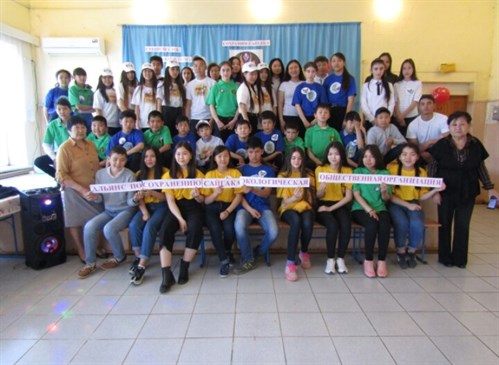 In Yashkul' District Saiga Day has traditionally been organised at Khaglysheva School in Yashkul' and features over 100 participants, including members of Living Heritage (Yashkul village), Bamb Tsetsg (Adyk village) and Elvg-Delvg Erdikhi (Erdniyevsky village) steppe clubs, students from the villages of Utta and Khulkhuta, officials, researchers and staff of the Student Centre for Ecology and Biology, Elista Education Administration, Cherniye Zemli Reserve, the Institute for Ecology and Evolution (Academy of Sciences of the Russian Federation) and students from Moscow Intellectual School.

O. Ochirova, Director of Yashkul School, and Ye. A. Samtanova, Head of the Zhivoye Naslediye ecology club, delivered welcoming speeches, in which they stressed the importance of this holiday for the whole of Russia. Then the Idris ensemble went on stage. The performers used dance to tell the audience about the saiga's fate and that the animal's salvation was in our hands. Young ecologists took part in an ecological adventure game called 'The World of Sacred Wildlife' ,in teams called 'tigers', 'wolves', 'foxes', 'owls' and 'saigas.' The game included  ecological theatre, a poetry contest on the theme 'The Saigas of My Native Land', 'The Erudite Person' and 'Dance with Us.' The 'saiga' team won, followed by the owls in second place and the tigers third. Prizegiving was followed by tea with traditional Kalmyk desserts. The final stage of the event consisted of planting 25 fruit tree seedlings in the school yard, and naming the area the 'Saiga Garden'.

Mergulchiyev Secondary School in Adyk, where the Bamb Tsetsg steppe club has been based for the last few years, picked up the baton and hosted the second phase of Saiga Day. The participants included grade 5 to 8 children from the school, members of the Ecologist club from Manjiyev Secondary School in Komsomolsk, the Young Ecologist club from the House of Children's Art in Chernozemelsky District and students from a secondary school in Sarul. V. Kh. Banjayev, Director of the hosting school, and Ye. Kh. Tsorkhayeva, Head of the Bamb Tsetsg club, greeted the children and their parents. After there was a prize-giving and an ecological adventure game. Finally, the children planted trees in schoolyards in the villages of Adyk and Erdniyevsky.

Saiga Day has been celebrated in Karakalpakstan for several years. It aims to improve people's attitudes towards the wildlife of their native land. In 2017, Saiga Day began with a marathon, dedicated to saiga protection, to attract the attention of the republic's wildlife protection and conservation law enforcement authorities to the growing level of poaching in the Aral Sea area. 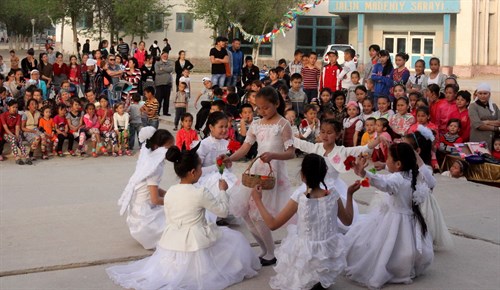 Starting on 1 May in Nukus, the marathon continued in the villages of Kirkkiz, Jaslyk and Karakalpakstan, all situated near the Saigachy Reserve in Kungrad District. Around 1,000 people of different ages took part in the marathon, with the message that saigas should be given a chance to survive. According to the participants, the event united them and allowed them to perceive how saigas feel on their long trips and how important it is to ensure the protection of these eternal travellers, particularly during the migration period. The awards ceremony was followed by a series of concerts. The concert in Nukus featured Karakalpak pop stars, the dance group Progress from the Centre for Education and Development and children from steppe clubs in Nukus and the villages of Kirk-kiz, Jaslyk and Karakalpakstan. The children took part in a conservation advocacy contest, aiming to convince others of the necessity of protecting saigas. The concert was closed by the Saiga Hymn performed by its author Koblan Yedenbayev, who made a symbolic gesture of passing the singing baton to the younger generation.

Shortly before Saiga Day, the villages of Jaslyk and Karakalpakstan hosted the semi-finals and finals of the Saiga Cup football and volleyball championships. This has already become a tradition, and featured adult teams from differentmahallas(town blocks), railway workers, gas compressor station workers, school teachers and senior school students. Adults and children came together for a "King of Cleanliness" activity, collecting 800 sacks of plastic bags and other household rubbish. Later, at the awards ceremony, participants were given prizes, crowned King and Queen of Cleanliness, and thanked by themahallacommittees.

In every village, Saiga Day began with the Saiga Hymn. In schools No. 54 in Jaslyk and No. 56 in Karakalpakstan this was followed by the unveiling of saiga murals in school ecogardens, saiga poster competitions, displays of crafts from natural and recycled materials and theatre performances. In Karakalpakstan, after the prizegiving, everyone did a flash mob in costume. The youngest inhabitants of Jaslyk again joined in Saiga Day this year. The teachers of one of the kindergartens, members of a new group called Ana Saygak ('Mama Saiga'), told the children about saigas and then, together with their pupils, acted out a fairytale about a magic saiga. Dressed in wonderful costumes, the kids felt their roles (of a rich man and a poor man, a saiga and a beast) so deeply that they looked like real actors. The finale consisted of dances and a game called 'Saigas and the Hunter', after which the children went out into the garden and planted flowers which they will keep looking after. The youngest students of School No. 37 were active participants in the Kirkkiz event, joining in numerous arts and sports competitions. Parents are keen to join in next year  as well.

The gala concert and awards ceremony in Jaslyk attracted around 500 spectators. The village council was one of the event's sponsors, awarding the Saiga Cup. Kuralay, a team of artists working in traditional Karakalpak embroidery, was a true gem of the festival. The girls organised a show to demonstrate their work and performed a traditional Karakalpak dance, dressed in beautiful skullcaps they had embroidered with their own hands. As it was in the village of Karakalpakstan, the celebration culminated in a general flash mob!

Apart from the Saiga Conservation Alliance and Ekomaktab, the co-organizers of the event were the Karakalpak Department of the Ecological Movement of Uzbekistan and Institute of Natural Sciences (Karakalpak department of the Academy of Sciences of Uzbekistan). The celebration was supported by the Council of Ministers of the Republic of Karakalpakstan and Nukus Khokimiyat (City Hall), as well as by WCN, WWF Russia and the company Uz-Kor-Gaz Chemikal.