Historical range, extirpation and prospects for reintroduction of Saiga in China

In a paper published in Scientific Reports in 2017, we delineated the historical distribution and potential reintroduction areas of saigas in China, using a literature review, interviews and predictive modelling.

Saigas were once widely distributed in northwest China. Records of the use of Saiga horns (ling yang, 羚羊) in traditional Chinese medicine prescriptions can be traced back 2,000 years. In the 1950s, Saiga populations declined rapidly to extinction in China due to overhunting, habitat reduction and blockage of migratory routes. In order to restore the species, in 1987 the Wuwei Endangered Wildlife Breeding Centre (WEWBC, now called Gansu Endangered Animal Protection Centre) was established in Gansu Province, China. Eleven adult saigas from San Diego Zoo and Berlin Taie Zoo were introduced to form the founder herd in 1988-1991, and one calf was added from the wild saiga population in Kalmykia in 1997. Currently, the population at WEWBC has increased to over 170 individuals. However, founder events, bottlenecks and inbreeding have resulted in low genetic diversity in this captive population, which, together with harsh winter conditions and epidemic disease, has led to large fluctuations in population size. The number of saigas at WEWBC once decreased by 77%, so only nine individuals survived in 2000. 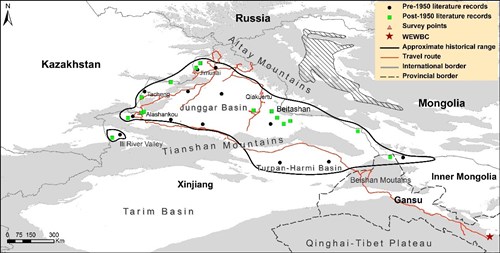 So far no reintroduction of saigas to the wild has been undertaken. Before a reintroduction programme is planned and execution implemented, an assessment of historical distribution patterns and potential reintroduction sites is necessary. However, compared with other regions in Central Asia, virtually no study has explicitly examined the former saiga range in China or developed a timeline of its decline. Also, no studies have been done to determine how historical saiga populations moved seasonally between China and its neighbouring countries, and whether the current habitat conditions can sustain reintroduced populations. Moreover, it remains controversial which subspecies of saiga was historically distributed in China. Some studies have stated that the Mongolian saiga subspecies was found in China, either as the only subspecies, or alongside the nominate subspecies. 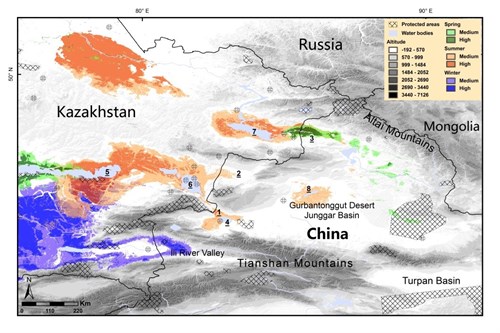 In a paper published in Scientific Reports in 2017, we delineated the historical distribution and potential reintroduction areas of saigas in China, using a literature review, interviews and predictive modelling. We found a total of 28 historical records, which covered the time period from the end of the 19th century to the 1950s and only related to Saiga tatarica tatarica. Most of the seasonally suitable habitats for reintroduction predicted by Maxent® were non-overlapping; in particular the potential wintering range in the Ili river valley was isolated from the spring and summer areas by the Tianshan Mountains. Most of the bioclimatic variables were significantly different between the former saiga range in China and the current range of the Betpak-dala population. WEWBC was not in an ideal reintroduction area due to its low habitat suitability and the difference in environmental variables. 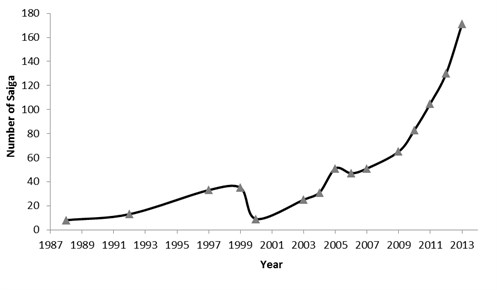 Furthermore, we infer that two different movement patterns existed historically (regular migration versus nomadic wandering). Our results demonstrate the challenges of restoring a free-ranging, self-sustaining saiga population in China. We recommend setting up of additional breeding centres in the protected areas within the potential saiga range in northern Xinjiang, and developing a national action plan to provide a framework for the future recovery of the species.

Note:You can access the full article published in the journal Scientific Reports at: http://www.nature.com/articles/srep44200