Conserving a small group of saigas within the Volga-Ural population in Atyrau province, Kazakhstan

A small and dedicated saiga centre faces daily battles to keep up the amazing work they do, read on to find out why...

Over 50 years ago a hunting farm (game husbandry centre) was founded in an area of 50 ha on the northern shore of the Caspian Sea in Isatay District, Atyrau Province, Kazakhstan (fig. 1). The farm's northern boundary lies about 30 km south of the Atyrau-Astrakhan highway and is marked only with information signs. The territory is a plain covered mostly by wormwood, grass and glasswort, with large areas of reed and individual tamarisk shrubs recorded along the seashore and in depressions. Apart from saiga, the Centre is inhabited by other mammal species, such as boar, hare, wolf, fox, corsac fox and raccoon dog. The bird community consists mainly of aquatic and semi-aquatic species. However, no specific botanic or zoological research has been carried out in the area so far.

Unfortunately, poor technical equipment has never allowed the Centre to carry out a proper saiga census. Normally, staff roughly calculated saiga numbers using camels to approach the animals; the Centre is surrounded by numerous cattle farms, and its unfenced territory is frequented by sheep, horses and camels, which is why saigas were not alarmed by the camels' presence. A group of saigas (9 individuals) was observed on 5 December 1995. The largest number (around 350 individuals) was recorded in 2011, when the antelopes formed 8-9 small groups. The saiga population currently inhabiting the Centre is 30-40 individuals (estimated in May 2017). According to staff, for over 20 years these saigas have stayed within the territory, living compactly on a plot 16km long protruding wedge-like into the sea, with its northern border 25 km long. Although this group of saigas lives 170 km south of the main habitat of the Volga-Ural population, they definitely live a settled life, which is supported by data from GPS collars placed on some of the antelopes. This was done by the Association for the Conservation of Biodiversity of Kazakhstan with the financial support of the North Caspian Operating Company in 2015 and 2016. Signals diminished in number over these two years due to wolf predation. Currently, stable signals are coming from only one individual - a female collared in 2016.

The group is not completely isolated, as, according to Centre staff, in December 2008, 9 males from the main population came from the northern areas of the Volga-Ural interfluve to join the group. At the same time, such contacts are obviously quite rare. This is indirectly confirmed by the normal death rate among the saigas in the Centre in 2010-11, when the Volga-Ural population decreased catastrophically due to disease in the calving area.

In the distant future, saigas from this group, which is not engaged in long seasonal migrations, could become a valuable source of genetic diversity for reintroduction to other parts of the species' historical habitat, as well as for research on captive breeding.

The Centre's researchers believe that the favourable factors allowing the antelopes to stay in this area include its location on a relatively isolated peninsula, the existence of the fresh-water Zaburun irrigation canal flowing all along the shore, which saigas use for drinking, sufficient food, and the Centre's staff's good performance of their duties. They conscientiously protect the area, control the wolf population and regularly provide hay as supplementary feed in winter. 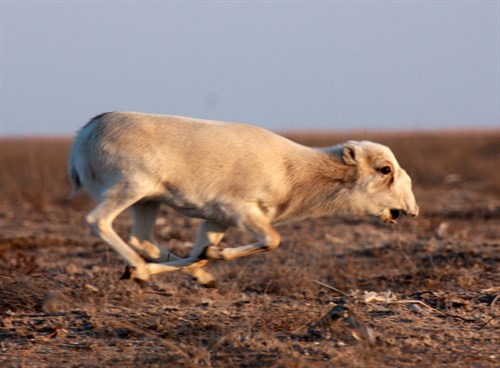 Until May 2013 only a few people knew about the saigas in the Centre, securing peace for the increasing population. Things changed for the worse when the provincial newspaper 'Ak Jayik' published an article, in which Asiltek Ispusinov, Director of Game Husbandry, shared his experience on saiga conservation. Poaching began in the area, facilitated by a network of dirt roads, and the population size dropped. December 2014 was fatal for the Centre's saigas; in one session poachers took most of the population. Unfortunately, the criminals were never found. The saiga's protection became much worse with the premature death of one of the Centre's best rangers, Gaynolla Izimovich Shaymuratov.

Currently, the Centre is facing financial challenges, which aggravate its problems with protection. To ensure proper protection, a series of urgent steps is needed, including the formation of two ranger groups enabling 24 hour protection, 4 vehicles and additional equipment such as GPSes, dashboard cameras, nightvision goggles, binoculars and camera traps. It is vital to erect observation towers to monitor the animals. These resources being available, we could increase the group size to several hundred individuals and, in future, develop ecotourism in the area, for which it would be helpful to repair the Astrakhan-Arytau road.

In conclusion, we note that it is due to Asiltek Ispusinov's great efforts that saigas continue to live in this Centre. In recognition of his enthusiasm and devotion to his job he was elected head of the Society of Hunters and Fishermen of Atyrau Province. Under Asiltek Ispusinov's management, the Centre's workers are willing to continue doing their best to conserve their saigas; however, they need help and would be happy to collaborate with anyone concerned with studying, popularising and protection of saigas.