Throughout saiga antelope range states it is illegal to hunt the saiga. Yet overexploitation remains the primary threat to the species. Urgent action is required to halt the decline and to restore populations throughout the species range. 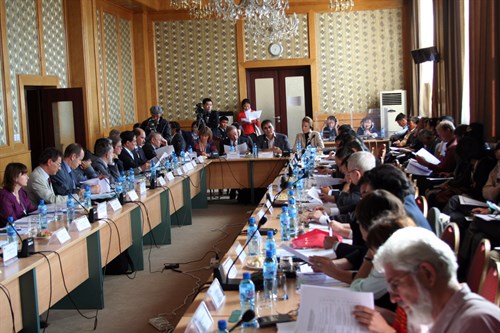 Since 1995, the saiga has been included in Appendix II of the Convention on International Trade in Endangered Species of Wild Fauna and Flora (CITES) as a means of primarily addressing the illegal trade in saiga horn. In 2002 the sub-species Saiga tatarica tatarica, which includes several transboundary populations, was listed on CMS Appendix II, with the entire species being listed in 2008.

CITES and CMS work closely together to contribute towards the international conservation of this flagship species of the Eurasian steppes.

Conservation efforts of this species are critically dependent on international collaboration between the range states. Several populations are transboundary and the length of the species migratory journeys between summer and winter ranges can exceed 1000 km.

To co-ordinate conservation measures throughout such a large range the close collaboration of range states, NGOs, scientists, local people and the international community at large is required. A Memorandum of Understanding (MoU) to conserve the saiga antelope under the auspices of the CMS has been in force since the First Meeting of Signatories in Almaty, Kazakhstan, in September 2006 to facilitate this co-operation.

The CMS MoU together with the associated Medium Term International Work Programme (MTIWP), provides a prioritised set of actions to guide the implementation of conservation action for the saiga antelope in the range states and in those countries which import saiga products. The MTIWP has been drafted on biological, economic and social research, as well as practical information provided by a range of stakeholders.

Activities focus on the following objectives:

Activities that contribute to the implementation of the CMS MoU and Action Plan are collected and communicated to stakeholders and interested individuals via the CMS website, Saiga News (a bi-annual newsletter of the Saiga Conservation Alliance, which is published in six languages), and now through this site as well.