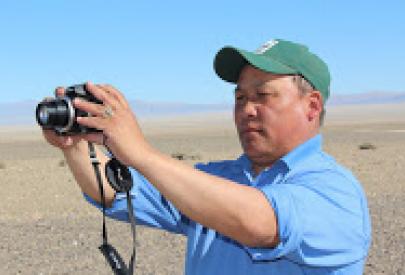 'Those who conserve nature are worthy of respect' - B. Batsaikhan

Mr. B. Batsaikhan is leader of the Saiga Ranger Network (SRN) team actively working in the Altai Sayan region of Western Mongolia.

The editor of Saiga News interviews B. Batsaikhan

Nature inspires and enriches our lives, contributes to our wellbeing and delivers the ecosystem services we need to survive. Moreover, conserving endangered species makes a significant contribution to a country's national and international obligations.

Editor: When was the SRN first established?

It was re-established in October 2007 under our saiga conservation project. Our SRN team carries out effective protection activities in the 11 regions of Khovd and Govi-Altai provinces, southwest Mongolia, which are considered to be saiga habitat. The SRN was founded in 1998 with six people from the saiga range, in order to raise public awareness and conduct ecological monitoring. Now we are 13 rangers working throughout the saiga range.

Editor: What was the situation before the network was established? I assume that a lot of illegal hunting took place?

You are right. We don't know how many animals and how many cases of poaching occurred before the network was established. One thing that I do know is that there was no control and no patrolling in the area, and also lots of advertisements asking to buy horn (ling yang, 羚羊) and other wildlife products. As a result of efficient and well-planned interventions, many cases of illegal hunting were detected just after the establishment of the SRN.

Editor: People are a key component of all nature conservation networks. What assets do your team members have?

Most of our rangers are herders who are permanently based in the saiga range. They are all supported by groups of volunteer rangers, which ensures that the SRN is a community-based operation. They know their homeland and species well, and are more committed to conservation, which means that we can achieve more.

Our network has three sub-teams and we compete with each other on who has the most success, which encourages the teams to strive for greater achievements. The team ensures a permanent presence throughout the saiga range, which is essential to deter poachers and also mobilises support from the local population.

All our rangers have been trained and equipped with motorcycles; radio communications, GPS, digital cameras, binoculars, field maps and uniforms. We conduct routine ecological field surveys on Mongolian saigas on a monthly basis and develop a detailed work plan quarterly through team discussions. That's why our work is successful. The team is highly motivated, well trained and highly respected in the region. It is one of the best and most efficient law enforcement units in Mongolia.

Editor: What specific poaching cases have been detected by the network?

Seven cases involving the poaching of 35 saigas have been detected since 2007 in close collaboration with local law enforcement agencies and the "MAPU-3" ranger team that works to detect wildlife crimes and brings perpetrators to justice. Also we detected eight cases of 44 saigas being poached, though the perpetrators weren't found and so these are still under investigation.

Besides saiga illegal hunting, we also detected cases relating to goitered gazelles, ibex and snow leopards in the saiga range and the neighboring areas. But detecting cases is not the most important thing, I think. The most important thing is to create an environment in which such cases can't occur.

Nowadays, rangers must know how to improve community awareness towards conservation, rather than threaten people with penalties. We are now focusing on these approaches. Along with control, we do public awareness activities to stop people from poaching. At least the community in the saiga range is now aware that there are saiga protectors and have started to support our work. It is essential to work with local people.

Editor: What are the challenges your team is facing?

Of course there are challenges. Demand for saiga horns makes poaching worse. We are suspicious that there might be highly organized groups secretly running the trade in saiga horns. This is one of the obstacles we face. In some cases, saiga horns we didn't know about have been seized by customs at border points.

Editor: What was the most important thing in combating the illegal hunting and trading of horns?

A reward for informants has become one of the best ways to uncover illegal activities. This policy has been widely advertised throughout the saiga range. Monetary rewards lead to the detection of cases of poaching. Up to now we have rewarded 8 people who have provided vital information on saiga poaching and 3 police officers who worked hard on these poaching cases.

As stated in our saiga conservation project report, we have seen a 40% increase in the population and a 10% extension of its habitat. This is confirmed by the discussions with the community, the current number of saigas, and frequent sightings in new areas. For example a group of saigas has been observed north of Durgun Tal since 2008, which is a place where saigas have been absent for several decades. This may be a first result of successful law enforcement and growing acceptance of saigas by herders. Community education and awareness have improved and they are keen to cooperate and to support us. They approach us not only about saigas but also other environmental issues, more than they approach the government rangers.

Editor: You usually say that you are rangers. Aren't you just saiga rangers?

Even though we are called the Saiga Ranger Network, our work is about the conservation of nature as a whole. This is right, I think. We protect not only saigas, but also other wildlife.

Editor: What is the most high priority action you think is needed in order to conserve saigas?

The Mongolian saiga is very rare. They might perish if natural disasters such as harsh winters happen frequently. Therefore, the most high priority action is extending the saiga's range. In order to do this, surveys and research on saigas including on their migration patterns, distribution, food habits and the possibility of extending their range should be undertaken. The second addressable issue is tackling insufficient pasture land and the high density of livestock in the saiga range. Thus, multilateral collaboration of various organisations and communities is crucial for sustainable pasture management in the saiga range, so that livestock can co-exist with wild ungulates.