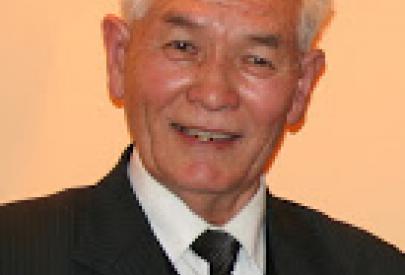 Professor Amankul Bekenov was voted the Saiga Conservation Alliance's (SCA) first Honorary Member in recognition of his tireless service for saiga antelope conservation over many years. The Steering Committee of the SCA is proud to have served with this distinguished scientist. He is also the first Saiga Hero.

Amankul Bekenov's research covered both field work and analysis, and concerned the ecology and conservation of a range of mammal species.

His excellence in science led to him being awarded the State Prize of the Republic of Kazakhstan in 1982. His work also led to the publication of four books over the period 1969-1985, on "Mammals of Kazakhstan", for which he and the other members of the editorial team were awarded first prize in 1988 by the Moscow Society of Naturalists, for the best work in the field of natural history.

Professor Bekenov has written many monographs and articles on the ecology and conservation of the saiga antelope in Kazakhstan, and together with his close colleague Dr Yuri Grachev, is the leading authority on this species in the country. Between 1978 and 2010 he has been an author of the mammals section of the Kazakhstan Red Data Book, which gives ecological and conservation information about 40 species in need of strict protection.

Professor Bekenov was Director of the Institute of Zoology of the Kazakhstan Academy of Sciences for many years. In this capacity, and also in his current role as the Director of the Institute's Laboratory of Theriology, he has guided the Institute's research programme into Kazakhstan's mammal species, and also led the scientific components of the Government's conservation and wildlife management policy. Part of the success of Kazakhstan's wildlife management policy must be attributed to the dedication and hard work of Professor Bekenov and his Laboratory over many years.

E.J. Milner-Gulland first met Professor Bekenov in 1995 when she visited Kazakhstan for the first time. She was very excited to meet him and his team, as they were a major centre of research excellence in saiga ecology, and she had read many of their papers. Professor Bekenov was very welcoming and inspiring, and there began an ongoing research collaboration which is still producing novel and conservation-relevant results, and which involved a wide range of international collaborations between researchers in Central Asia and Europe.

Work in these first years was mostly funded by the European Community through the INTAS scheme, and covered parasites and diseases of saigas and livestock, the effects of rangeland degradation on saiga movement ecology and saiga genetics.

Over the years, she has been very grateful for Professor Bekenov's support not just for her own research projects, but also for the stream of students who she sent from her university to study in his Laboratory. The subsequent success of these young researchers (of whom there are at least eight) is testament to his guidance and supervision and to his team's research excellence.

Professor Bekenov was a founding member of the Saiga Conservation Alliance, and a strong advocate for the importance of international cooperation for research and conservation of this species. He has worked extremely hard for the SCA, and is particularly influential in the editorial board of Saiga News, ensuring that the bulletin has a reputation for scientific rigour and excellence.

E.J Milner-Gulland is proud to be a colleague and friend of Professor Bekenov and she looks forward to long years of continued collaboration with him.