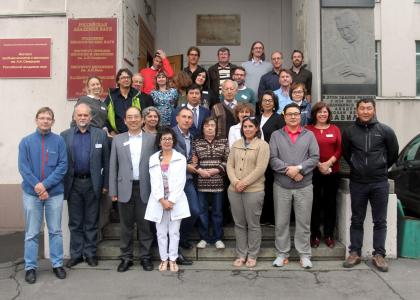 On 28th-29th August 2017, the Russian Academy of Science’s Institute of Ecology & Evolution, San Diego Zoo and the Saiga Conservation Alliance hosted a two-day workshop to exchange knowledge and develop a strategic plan regarding the role of specialist captive breeding centres in saiga conservation.

Representatives of the saiga range states – Russia, Kazakhstan, Uzbekistan, China and Mongolia – participated in the meeting. The workshop was also attended by the officials from the Ministry of Natural Resources and Environment of Russia, European and American zoos, and international conservation NGOs including IFAW, WCS  and WWF.

Academician Vyacheslav Rozhnov, Director, The A.N. Severtsov Institute of Ecology and Evolution, Russian Academy of Sciences said: “I consider it very symbolic that the Institute, the leading academic institution that forms the scientific basis for the conservation and restoration of rare species, was chosen as the venue for such an important seminar. Many researchers of our Institute have devoted their scientific work to developing methods for keeping saigas in captivity, as well as studying its biology and ecology in order to preserve the species as a whole. I am confident that the results of the seminar will help further development of saiga conservation through captive breeding”.

The saiga antelope is listed as Critically Endangered by IUCN and faces severe threats in the wild, including poaching, mass mortality from disease, and linear infrastructure disrupting migration routes. Since 2010, all five populations of the species have been severely affected by at least one of these threats. The workshop participants discussed the role of captive populations of saigas in mitigating these threats, and circumstances under which captive populations of saigas can complement and reinforce conservation of wild populations. The importance of improving the genetic composition, behaviour and physical health of the captive stock, making sure that facilities meet the highest welfare standards, and the scientific, educational and awareness-raising potential of captive populations were stressed.

Professor E.J. Milner-Gulland of Oxford University and the Saiga Conservation Alliance noted that: “This workshop has sparked new collaborations, and allowed people working for saiga conservation throughout the world to exchange their ideas and experiences. It was a very positive and inspiring meeting and I look forward to facilitating the attendees’ ongoing engagement on these issues, so as to improve the conservation status of the saiga.”

The meeting ended with a commitment to develop an international network of captive breeding professionals to continue the productive exchanges of ideas and best practice which were started at the workshop.

Andy Blue of San Diego Zoo Global commented: “The workshop was an excellent opportunity to meet with like minded colleagues from different institutions and discuss best practices in Saiga husbandry as well as in situ populations. San Diego Zoo Global looks forward to an ongoing relationship with our in-country partners and collaborators for Saiga conservation.”

Jeff Holland, Director of the Centre for the Conservation of Tropical Ungulates in the USA said: “This was a very good first step to coordinate all the stakeholders into sharing their knowledge of saiga and working together to ensure the species’ continued survival.”

Maria Vorontsova, Director, IFAW Russia and CIS, remarked: “We hope that the workshop will enable us to attract attention to saiga conservation among the governments of the range states, and that they will increase their efforts to protect wild stocks and strengthen the existing saiga breeding centers to replenish the wild populations.”

A report on the workshop can be viewed here

IUCN Guidlines for Reintroductions and Other Conservation Translocations

To develop a strategy and build an international network to support captive breeding for conservation.